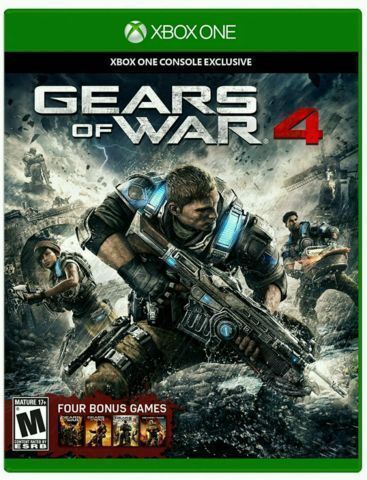 For gamers, one life is just not enough. Conquer worlds, discover hidden treasures, build your own universe, rescue the helpless, win the race and become the hero in this wide variety of video games eBay has for you.

From the latest releases of titles such as Madden, WWE®, PES, FIFA®, Mario, to the very first edition of Sonic the Hedgehog, eBay has a wide selection of games available across all your favorite platforms.

It’s time to play. Turn on that PlayStation® VR, bring back the memories with a Nintendo® NES Classic Edition, check out the amazing 4K graphics on a new Xbox® or play the latest titles on the Nintendo Switch game system. Whatever your preference, eBay has everything you need to level up your gaming.

We have listed the hottest releases, the most anticipated titles to keep your gaming experience, up-to-date.

PlayStation’s most anticipated and most popular games to date are:

His bloody vengeance against the Gods of Olympus is part of his past. Kratos is now a man who lives in the far land of the Norse Gods and monsters. It is in this untamed, challenging world that he must fight to live another day, every day…and teach his son to do the same.

The ultimate motor racing experience has return to shape the future of motorsports in gaming. Become a legend for your country or your sponsoring manufacturer as you compete through multiple race classes, including GT3, Prototype, Rally, and more.

Chloe Frazer seeks the India’s Western Ghats to locate the Golden Tusk of Ganesh. To achieve her goal, she must become allies with the ruthless mercenary Nadine Ross and start a race against the clock to retrieve the idol before it falls in the wrong hands. In her journey, she must fight also the demons from her past and decide what she’s willing to sacrifice to forge her own legacy.

Defy the Empire, become the hero, pilot one of the most legendary starships of history, explore the galaxy as one of your favorite Star Wars characters or forge your own legend as an elite special ops soldier in an all-new Star Wars story.

The NBA gaming franchise presents the highly anticipated 2K18. A game that features unmatched authenticity and the best performance in basketball games up to date. Get it now in “Legend Edition” and “Legend Edition Gold” where you could build your perfect fantasy team, featuring a guaranteed Shaq card, one random Team 2K Free Agent card, and more!

Call of Duty® takes a fresh step into the past with Call of Duty®: WWII—an action-packed World War II tour for a new generation.

You can find an extensive catalog of 4K games for your Xbox One X, such as:

Enjoy the stunning visual in-game experience of the new Madden NFL18. Stadiums, inside and outside, cityscapes, and the fantastic gameday show in the best and most realistic football game to date. Play each match according to your personal setups by selecting from three new Play Styles or play the best real-world matchups weekly in Play Now Live!

A vicious enemy has attacked. War, like you have never seen before has been unleashed upon the major cities, dragging the world into darkness and confusion. As a result, the Agency got irrefutable intel about who might be behind the attack and will march forward until they find whoever is behind the attack…by any means necessary.

Released on October 27, 2017, Assassin’s Creed® Origins takes you to the never-before-told origin story of Assassin’s Creed. You are Bayek, protector of Egypt, whose personal story will lead to the creation of the Assassin’s Brotherhood.

Available since September 2017, and powered by Frostbite™, EA SPORTS™ FIFA 18 blurs the line between the virtual and real world of the heroes, teams, and atmosphere of the world’s most popular game.

Players can get this title in 3 different versions: Ronaldo Edition, Standard Edition and Icon Edition.

Superman must be stopped!

Power up and build the ultimate version of your favorite DC legends in INJUSTICE 2 and help humanity withstand the ultimate threat.

The “Injustice” story continues as Batman struggles to bring down Superman’s regime while a new threat surfaces to put Earth’s existence in jeopardy. Choose your favorite characters from the biggest DC Universe roster ever and fight in the most iconic superhero locations to ensure Earth’s survival.

The multi-award-winning Skyrim Special Edition put you inside the fantasy with life-like detail. Skyrim’s Special Edition includes the game, add-ons and all-new features like remastered art and visual effects. There are also God rays, dynamic depth of field, and screen-space reflections.

JD Fenix and his friends Kait and Del are barely alive. Now, they most try to rescue the ones they love and figure out who might be their new ferocious newest enemy. You can play in three different modes: “Never Fight Alone”, “Horde 3.0”, “Multiplayer”.

The home of Mario, Metroid, Zelda and many other titles that have grown with us over the years. Nintendo 3DS and Nintendo Switch are this brand’s leading consoles and here is information about their latest game releases.

Check out this list of the latest and most popular games for your Nintendo 3DS:

Return to 1991 in this new Samus adventure. New weapons, new abilities and the never-ending dose of deadly enemies return to chase our heroine once more. However, you don’t need to be a hardcore, long-time fan of the franchise. Its design and gameplay will allow the new space fighters to fall in love with the iconic and now classis story of Metroid.

Minecraft is a game about placing blocks and going on adventures.

Made for the Nintendo 3DS series, Minecraft will allow you to explore the bizarre and ever-changing world of homes and castles. When you enter the “Creative Mode”, you unleash unlimited resources and in the “Survival Mode” you will put your craftsman skill to the test as you fend for your life.

When a monster comes around, don’t hide, ride! Collect eggs and become the caretaker for an exotic array of species full of powerful abilities in this all-new Monster Hunter quest. Play next to your buddies, battle alongside them. Use combo-attacks on your enemies. Something missing? Then combine genes to generate new monsters with more skills!

Your friends. Your adventure. Your rules.

In the beginning, warriors have united forces to battle in the land of Ever. Now, you can save Miitopia with the help of the Mii™ characters based on your favorite people. Give them tasks and roles to fulfill around the kingdom, manage their friendships, give them jobs, abilities, looks, and guide them to a quest to vanquish the Dark Lord to restore the stolen faces of the citizens of Miitopia.

Choose from the latest and the best-selling titles from Nintendo Switch.

LEGO® Worlds is an open environment game made entirely of LEGO bricks which you can freely manipulate and populate with LEGO models.

Use your imagination to shape the world, well, the LEGO world! Use the in-game tools to create vast landscapes (LEGOscapes?) and watch your creations come to life while you interact with all kinds of characters in a land where anything is a brick away to become possible.

There is a crisis in the Mushroom Kingdom. A mysterious vortex, dropped the rowdy Rabbids into the once-peaceful land. Now, Mario, his brother Luigi, the Princess Peach and the loyal Yoshi must team up with a set of peculiar characters: Rabbids!

As a team, they must complete puzzles, and fight against the most unpredictable enemies while they learn how to cooperate despite their unique personalities.

The legendary kart racing game is back!

Race or battle against your friends through the most iconic battle courses of this franchise or discover new scenarios to test your Mario Kart skills. Play with your friends locally or in multiplayer mode in High Definition.

Return to your favorite Wii U racing tracks and play as King Boo, Dry Bones and Browser Jr. who return to the franchise or choose the Inklings as they make their debut in the Mario Kart history.

The Legend of Zelda: Breath of the Wild

This new “Legend of Zelda” game presents a more open world for the gamers who enjoy exploring every corner of the land of the kingdom of Hyrule.

In “Breath of the Wild”, our hero, Link, awakes after being asleep for over 100 years, just in time to fight the evil Calamity Ganon, a godlike creature, who pretends to destroy Hyrule and then the entire world.

Remember that with the new Nintendo Switch, you can take your system on the road, and quest as Link anywhere you like.