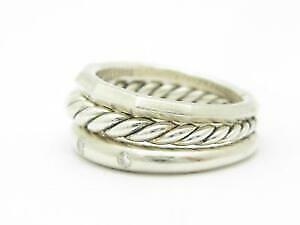 Since 1980, David Yurman has shared his jewelry with the world, especially his ring collections. These rings are made of a variety of gems and metals.

The stones used by David Yurman are varied and include blue topaz and white topaz; Morganite, which is a type of pink or purple beryl; diamonds and emeralds; and a gem called prasiolite, a green or yellow-green gem made from irradiated amethyst. There is also black onyx and chalcedony, a type of quartz that comes in an array of colors. Pearls and mother of pearl, two of the few gems that come from living beings, are available.

David Yurmans jewelry can also contain quartz, which comes in a rainbow of colors, and black orchid, which is an amethyst with a hematite backing. Lapis lazuli is a rock made up of blue minerals that was often used to produce ultramarine paint, and iolite -- also called water sapphire -- can appear blue when viewed one way and yellow when viewed another way. You can even buy polished and faceted meteorite.

What are David Yurman’s rings made of?

They are made of the following metals:

Content provided for informational purposes only. eBay is not affiliated with or endorsed by David Yurman.